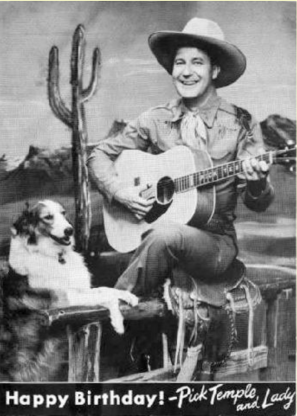 I will live up to the creed of a Pick Temple Ranger - to carry on the principles of good citizenship, to help the needy, the aged and the sick, to respect my parents and teachers, to love my neighbors, city and country. Don't put off until tomorrow what you can do today.

The unthinkable occurred one otherwise ordinary day in 1961. Washington cowboy Pick Temple led his pony off into the black and white TV sunset never to return.

After 12 years and several thousand broadcasts of his immensely popular children's program, "The Pick Temple Giant Ranch," Lafayette Parker "Pick" Temple, a native Washingtonian folk-singer-turned-television-personality, packed up his puppets, cased his guitar and became a pure and gentle childhood memory.

"lt's been over 20 years since l appeared on TV in Washington and I'm certainly not a legend in my own mind," laughs Pick, now retired and living with Jeanette, his wife of 48 years, in Sun City, Arizona.

Not a legend? A quarter of a million Washingtonians who grew up with Pick Temple, Ranger Hal, Bozo, Captain Tugg, Pete & His Pals, Claire & Coco, Cousin Cupcake and other local kiddie shows of the 1950s and early '60s would disagree. Pick Temple was arguably Washington's original TV superstar.

Together with his faithful dog Lady, his pony Piccolo, puppets galore and an occasional Popeye cartoon, Pick's humor, games and folksongs captured the fancy of area youngsters who watched faithfully and were eager to enlist in his Giant Ranger club.

Lucky "rangers" could appear with Pick on the show if their postcard requests were chosen, and he highlighted as many individual kids as airtime would allow. (He couldn't accomodate all his fans, however. One young lady waited eight years for her chance to sit in the studio "hayloft" and was a college sophomore when her big moment finally arrived.)

"I enjoyed the children", says Pick, "but I never considered myself an actor. I was more of a participant, so to speak. "

WJLA-TV newsman John Harter and Pick's son Parker Temple, were puppeteers on the show. Behind the deceptive simplicity of the format, they remember a larger process at work.

"On the air Pick would frequently quote Shakespeare," recalls Harter. Pick's son, an Air Force Major at the Pentagon, explains "The reason that Dad was so well remembered is that he never talked down to the kids, never played the buffoon. He was -- and still is -- the inveterate teacher. The kids would just be having fun but the parents would appreciate what was going on."

"If it were a nice day," adds Harter, "Pick might turn to the camera and say, 'You kids ought to consider going out to play instead of watching TV.'"

That kind of naive honesty vanished down the vast TV wasteland trail not long after Pick's "Ranch" closed.

Pick Temple was never really a cowboy before he donned his chaps for television. As a young man during the 1930s he had taken an interest in American railroad songs. Riding the rails in box-cars and sitting at hobo campfires he heard the work songs and the out-of-work songs of common men caught in the throes of the Great Depression. He recorded some of these for the music archives of the Library of Congress in 1948. That same year he first appeared on local television.

"I had been.playing folksongs around town at banquets, talent shows and such," Temple recalls. "WTOP called and asked me to perform on their 'Stars of Tomorrow' amateur show. At that time I didn't know a single person who owned a TV set and I had never even seen one."

The success of his TV debut convinced Temple to abandon 19 years of civil service with the Census Bureau for a full-time commitment to "the tube." It was a happy move as evidenced by Temple's 43-volume diary which chronicles his long career in the infancy of the new broadcast medium.

"The Pick Temple Giant Ranch," playing live seven days a week, ultimately proved too expensive for its sponsor, Giant Foods. The show folded and Temple returned to government as an audio-visual expert, producing motivational films for the Volunteers In Service To America (VISTA) program.

Today at 73, Temple enjoys a laid-back Southwest lifestyle in the wide open prairies he had not yet seen in his TV-cowboy days. Golf and swimming keep him fit, and the railroad memorabilia which crowd his home reflect his continuing lifelong love affair with trains. Of course, he clearly likes reminiscing with his old "rangers" but he's quick to put his TV accomplishments in an ever-humble perspective.

"I never really thought our show was that good," says Pick. "The children had a great time, we did a lot of things, but we had some real turkeys, too. Nostalgia is a great magnifying glass. People look back and say, 'What a terrific show that was,' but I believe it was terrific in their imaginations."

Maybe so, but it sure was fun.

When Pick Temple retired with his wife to Arizona,  I had the opportunity to correspond with him often.  Pick enjoyed hearing from his Washington DC area friends, and I always looked forward to his letters. Below is an example. The article he refers to was one that I wrote with Donn. B. Murphy on DC-area  people and things that appeared in the 1985 Guinness Book of World Records.  Larry King was cited as the 'most heard radio broadcaster'.

Your article on DC area records came today and for a change, I had time to sit
down and read it immediately. As usual, you guys have come through with another
good one!

Glad to hear your book is nearing the end of the gestation period. I look forward
to its birth!

As for my VCR, it's a VHS.  Glad to hear Hal Shaw is so pleased. Also glad he
is apparently well again. Last I heard he had been ill.

Also was interested to read about one of my current favorites, Larry King. I have a bedside radio with an ear plug and I sleep with my radio on all night.  I get a lot of information in my half-sleep! I have only a couple of gripes about his show, or
rather about his language. He is supposed to be a  communicator, yet every broadcast he blatantly makes a horrible blunder in pronunciation, which grates on me even in my semi-stupor. When he signs off, he gives a free plug to Duke Ziebert, whom he refers to as a "restauranteur."

Someone should advise him that there is no "n" in the word. If he insists on using it, he could at least pronounce it right. I bought his biography and read it with interest. He's been, and is, quite a  character.

Also, he occasionally murders the word "memento" be pronouncing it "momento." The word stems from the Latin, pertaining to a remembrance, rather than a moment in time. But he does have interesting guests.

Congratulations on the arrival of your first child. Now you are one of us. My best to your wife, Margaret, and thanks for writing.