Epidemic! Two Georgetown Doctors in a Season of Distress

The two physicians risked their lives in the battle against a raging epidemic. One was a highly-regarded military officer from a family distinguished by its long line of physicians. The other was a discarded civilian doctor, serving a life sentence in a federal prison. 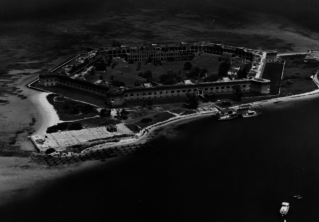 Photo: Dr. Mudd was imprisoned at Ft. Jefferson in the Dry Tortugas about 70 miles from Key West

Seventeen days after composing this eulogy, the commander too, was dead. Dr. Smith is further memorialized in a monument at the Fort. "In admiration of his virtues as a man, of his zealous and impartial conduct as an officer and his devotion to his profession."

With the army surgeon dead, and recognizing the perilous plight, the horrified officers set their civilian prisoner, Dr. Mudd, to work in the Army hospital.  Although officially a convicted accomplice to the presidential assassination, Dr. Mudd served valiantly during these terrible early weeks of the epidemic, caring for ailing inmates and soldiers.

"He is a very intelligent child, and has amused me on several occasions," Mudd wrote. Little Harry performed somersaults for the doctor. "I fear he will not survive."

Dr. Samuel Alexander Mudd, a genial, intelligent man, stood pathetically out of place behind bars at Fort Jefferson, a stench-filled military prison on the barren rock of the Dry Tortugas Islands some 75 miles from Key West, Florida. Convicted as a criminal conspirator in the murder of Pres. Abraham Lincoln (it was he who set actor John Wilkes Booth's broken leg). Mudd's determination to clear his name and prove his innocence forged his decision to survive the "life at hard labor" to which he was presently exiled. In letters written almost daily to his wife Frances, he is revealed as a man of kind and steady temperament -- a self-assured practitioner with the physician's eye for detail.

The newcomer to the island, Brevet Maj. Joseph Sim Smith, Jr, was a surgeon in the Army of the Republic, taking up his assigned duties at Fort Jefferson in the summer of 1867. Previously Smith had served at Fort Hood, as assistant surgeon and Bedloe's Island in New York Harbor, and in surgery at Dand's Island, New York, and Beaufort South Carolina. Accompanying Dr. Smith to the

dry Tortugas were his wife, Lizzie and his two young children, Harriet and three-year-old Harry.

The two doctors, a respected officer, and disgraced civilian took an immediate liking to each other.

"Dr. Smith… seems quite a nice man and has manifested a kind feeling toward me," Mudd confided to Frances in August 1867. The friendship which sprung up between the major and the prisoner was born of commonalities: they were native Marylanders; they had mutual friends, and each was courageously dedicated to the practice of medicine.

Both for also alumni of the Georgetown University School of Medicine. Mudd studied for three years at Georgetown before graduating from Baltimore Medical College in 1856.  Smith received his M.D. from Georgetown in 1857. As Georgetown medical students they could hardly have imagined how the Civil War and the tragedy at Ford's Theatre were to cast their fates.

Samuel Mudd wrote his beloved Frances on the day after his first encounter with Smith, expressing a disquiet presaging catastrophe.

"The weather has been very calm for several days and very warm," he explained. Water and everything in the shape of vegetation rapidly undergoes decomposition here. The seawater suffered to stand in a bucket two or three hours becomes very offensive to the smell."

Then tragedy struck. Mosquitoes breeding in the stagnant water bore a deadly virus. In one week three men on the island fell suddenly dead of yellow fever and more jaundiced, sweat-chilled victims were hurried to the hospital under Dr. Smith's care. In the following days, the number of ill men grew, and the second, makeshift, hospital was set up on a nearby island. Here new patients, some comatose, some hemorrhaging internally, were hastily quarantined.

"One of the officers is now sick with the disease," reported Mudd, "and not expected to recover; quite a panic exists among soldiers and officers."

The stricken officer was his fellow alumnus friend and colleague US Army physician Joseph Sim Smith. Five days later, Smith was dead at the age of thirty. The Post Commander at Fort Jefferson paid him homage in a letter written to Surgeon General James Barnes in early September:

"We are in the fourth week of this epidemic. We have had over one hundred cases. Dr. Smith literally worked himself to death...He died in the harness, a kind friend, a noble-hearted man, a thorough physician. No nobler deed has been shown on the battlefield than the calm and determined courage exhibited by the Doctor during the prevalence of the disease. Sent here in the middle of the sickly season, never having been South before nor ever having seen a case of Yellow fever, with a wife and two children dependent upon him, regardless of every tie gave up his life in the performance of his duties."

Dr. Mudd's sad diagnosis was correct. "I visited my little pet and found him to my great sorrow, almost in the agonies of death. He had the black vomit."  The Child died the following morning in the doctors arms.

Samuel Mudd himself caught the fever in October. He recovered, but surely with a heavy heart. His epitaph for Fort  Jefferson: There is no news upon this desolate island. Everything is lifeless and inactive.

Pres. Andrew Johnson pardoned Dr. Samuel Mudd on February 8, 1869, and the doctor returned to his family and farm in Charles County, Maryland. There he resumed his medical practice. Thirteen years after his release from prison, Dr. Mudd died of pneumonia. his death was attributed to his making a night call in extremely inclement weather, but perhaps his bout with yellow fever and the terrible experience of his trial and the epidemic had finally taken their toll. Philadelphia Pennsylvania residence George McNamara now George McNamara no

At the entrance to the cell he occupied is a plaque honoring Dr. Mudd:

"... Upon the occasion of the prevalence of yellow fever... Dr. Samuel Mudd devoted himself to the care and cure of the sick, and interposed his courage and skill to protect the garrison... From peril and the alarm, and thus saved many valuable lives and earned generous and faithful service to humanity."  President. Andrew Johnson 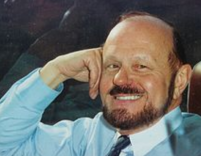 This article first appeared in the Spring 1990 Georgetown Medical Bulletin. My co-author and great friend is Donn B. Murphy, now Emeritus Professor of the Fine Arts Department at Georgetown University and Past President of The National Theatre. Donn and I wrote many articles and one book together.

Our thanks to the late Dr. Richard D Mudd, Georgetown class of 1926, who generously provided personal letters from his grandfather for this article.