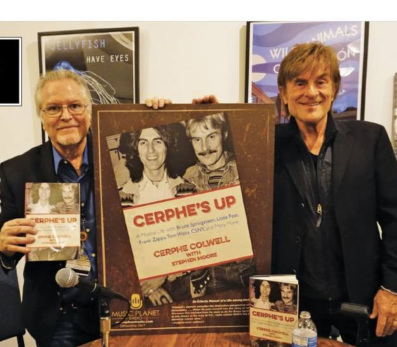 Tom Waits, CSNY., and many, many more.

Cerphe’s Up is both historically significant and a fun, revealing ride with some of the greatest rock-and-roll highfliers of the twentieth century. Cerphe’s Up belongs on the reading list of every rock fan, musician, and serious music scholar.

"He is not a household name, but Colwell seems to have met everybody in the music business during his heyday as a rock ’n’ roll deejay for more than 45 years in Washington, D.C. During his career at WHFS, where he had the luxury of playing whatever he wanted, he met the musicians listed in the subtitle as well as George Harrison, Stevie Nicks, Steve Van Zandt, and Jackson Browne. His station was among the first in the country to play Bruce Springsteen. One of the responsibilities of a deejay is, of course, to promote and attend shows, which Colwell did with great anticipation, and one of his favorite venues was the Childe Harold, where he saw Springsteen perform for the first time. “He was the owner-builder-driver of the band: passionate, engaged with the audience, sometimes even playful and goofy,” Colwell recalls. Yet when Colwell interviewed him on his radio show, Springsteen was “shy and unassuming.” Coauthored with Moore, Colwell’s memoir is pure fun and, for many, a joyful trip down musical memory lane."  — June Sawyers, American Library Association's Booklist

“Pure fun and for many, a joyful trip down musical memory lane” – Booklist

''Colwell’s memoir provides the distinctive perspective of a rock personality. . . . When he puts himself into the story, as when he discusses the introductions he used to do for Bruce Springsteen at live shows or his time at D.C. radio station WHFS 102.3, the narrative comes alive.”  Publishers Weekly
"Like his voice, Cerphe’s book, written with Stephen Moore, is smooth and inviting."  John Kelly, Washington Post
" I've been a fan of Cerphe for decades, as a friend and a musician. He's always searched for and shared great music with his radio listeners. I always appreciated Cerphe's sharing my own music too. I've enjoyed many colorful discussions with Cerphe through the years about the wonders of all types of inspired music and believe we share a common belief that music is truly our planet's sacred weapon. I recommend his book to all music fans."   Nils Lofgren, solo musician, member of the Rock Hall of Fame with the E Street Band

“ Somewhere in the 1960s, someone said ‘Let’s put some rock and roll music on FM.’ So there weren’t that many people listening, so not much pressure. The FM stations became very creative. You could play what you wanted and you could create an art form out of your own broadcast. Cerphe was involved in this.”  Frank Zappa

" Cerphe's Up is a fabulous read... right up there with Keith Richard’s enlightening, witty and fabulous tome, Life.'"
John Friedman, The Huffington Post 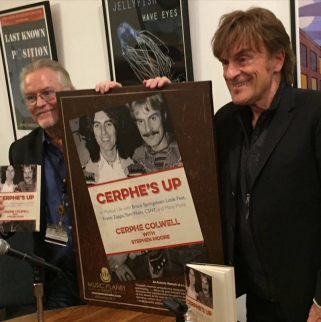