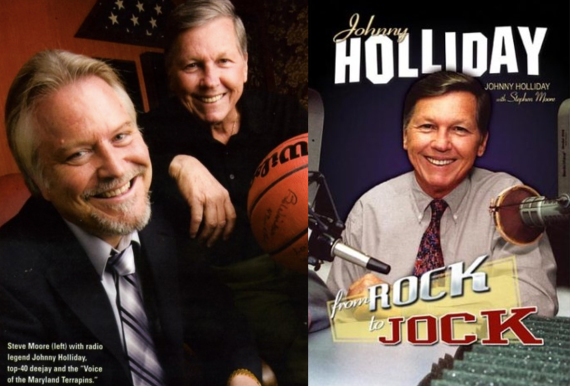 In Johnny Holliday: From Rock to Jock, the pioneer Top 40 DJ retraces the steps that carried him from an "all black" R&B station in hometown Miami to his current 24 year tenure as radio play-by-play voice of the University of Maryland Terrapins. Written with his friend and journalist Stephen Moore, Johnny recalls his glory rock and roll DJ days in Cleveland, New York (where he worked with Murray the K), and San Francisco; his job as PA announcer for the Browns, Warriors, and Raiders; his live coverage of nine Olympic Games for ABC Sports; and, in a diverse career that includes creating the "Radio One-ders," the first radio station charity team, his adventures with close friends and professional colleagues like Rick Barry, Paul Hornung, Sal Bando, Joe Theismann, Joe Dimaggio, Morgan Wooten, Denny McLaine, Ted Williams, Sugar Ray Leonard, and U-MD Coaches Gary Williams and Ralph Friedgen.

"You think Johnny Holliday is a great sportscaster? You should've seen him on the court, as a blazing point guard on various radio station basketball teams. And you should've heard Johnny as a rapid-fire DJ, spinning stacks of hot wax at topflight Top 40 stations, from San Francisco to New York City. In "Johnny Holliday: From Rock To Jock," Stephen Moore slows him down just enough to tell you Johnny's amazing story."Ben Fong-Torres, Author, "The Hits Just Keep On Coming.”

"In Miami, in Rochester, in Cleveland, in New York, in San Francisco, in Washington, DC. Over the years, hundreds of thousands of kids in city apartments and suburban tract houses and rural barns tuned into Johnny Holliday, eager for his voice, knowing he was speaking just to them." -- From the Foreword by Tony Kornheiser 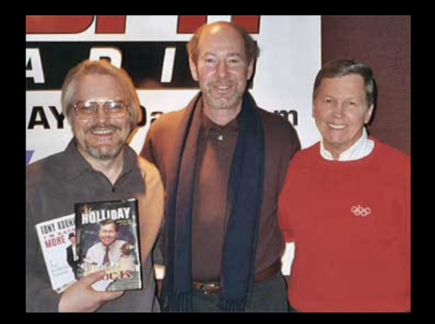 "An exuberant account that will make you smile, and then laugh out loud. What a life!" -- Cokie Roberts, ABC, NPR Radio