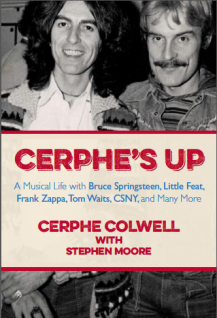 Cerphe was at the radio console early and was a big part of my musical education and evolution. He provides a tightly written story of being a DJ and a lot more, in a time when there was still joy and creativity in the music industry. A time when radio (WHFS) really mattered. This book is full of great stories and wonderful artists, humor, sadness, and above all, musical memories. Crank up your old Victrola (or tune into Music Planet Radio online), kick off your shoes, and dive in for a warm journey through Cerphe's life on air! Bob Adamson, 3/24/2017

Superb stories told so well from a fresh perspectiveA must-read for anyone who worked in the music biz or grew up in DC.  Highest recommendation. D. Sean Brickell, 11/16/2016

This new memoir by nationally known radio personality Cerphe Colwell, written with Stephen Moore, is a great, entertaining, humorous, warm and personally revealing narrative of his 40-plus year career in broadcasting. Cerphe describes his roots in a loving family outside of Boston, and how he began his career in a serendipitous way, right out of college at the dawn of the 1970s. He sat in with a friend at a local FM station in Washington, DC, which at the time allowed a few “off-hours” for broadcasting music that he and his friend liked. That station morphed into the first progressive rock station, WHFS, in Bethesda, Maryland, and Cerphe quickly became the most prominent DJ, with a voice born for broadcasting. He describes many fascinating personal stories and interviews he did with rock stars, including those who were just on their way up at the time, who have appeared on his shows over the decades. Cerphe describes his long-term career in the music industry, as both on-air personality and executive with major broadcasting corporations. Unusual for someone in the music industry, he developed an early interest in meditation, vegetarianism, and concern for the environment. Interestingly, he managed to avoid the often-destructive drug indulgences of many of the rock stars over the years. He also touchingly describes how the universe “conspired” to bring him and his wife together after several near-misses; while navigating the “slings and arrows” of life and loss that we all face as decades go by. Today, Cerphe has an internet-based radio network, Music Planet Radio, which has an expanding program lineup, including the flagship program, Cerphe’s Progressive Show. For anyone interested in the inside stories of rock artists – and especially, for people like myself, around the same age as Cerphe, who entered young adulthood at the beginning of the progressive rock era and have traversed the decades since with his voice always in the background of our lives – his book is a “must-read!”     Doug L. 12/3/2016

The book describes his life as a disc jockey at WHFS 102.3 during a time that is now considered the ‘peak’ of alternative, free-form FM radio and how he was instrumental in introducing unknown artists like Little Feat, Bonnie Raitt, Bruce Springsteen, Tom Waits and Frank Zappa (to name a few) to radio listeners. Cerphe includes contributions from many of his favorite ‘HFS co-workers which provide revealing details of what is was like to work there. Throughout his long career at WAVA, DC-101, and other radio stations he has known the biggest names in rock history.

It’s a fabulous read. Cerphe’s Up is right up there with Keith Richard’s enlightening, witty and fabulous tome, Life. What also shines through is the humble, unassuming and sometimes shy nature of many of the artists Cerphe and his co-author, Stephen Moore profile.

I was lucky to grow up in the Washington DC area and be able to listen to some of the best music from "up and coming" artists. A lot of famous musicians got their start there. There were so many great clubs from Northern Virginia to Baltimore and even Southern Maryland. But one didn't have to go to any of the local venues to hear them. You just had to tune your dial to FM 102.3 WHFS. This was no Top 40 station. This was a station with a bunch of eclectic DJs that played whatever they wanted whenever they wanted. One of those DJs was Cerphe Colwell. Cerphe played music from (then) unknown artists that you had never heard of, but if he played it or had the artist on his show, you know it was going to be good! His in-studio interviews (which always meant the artist was going to play something live!) were legendary.

This book is about that romp through the years of giving us this (to take from an upcoming documentary on the heyday of WHFS) "Feast for Your Ears". The artists, the songs, the clubs where they played, the people behind the scenes, other DJ's, you name it. It's in this book. And I guarantee you that you will learn some things you never knew before (I did!). So if you want a trip back through the years of the way music was done right, then pick up this book. Cerphe Colwell and Stephen Moore did it right with this one!