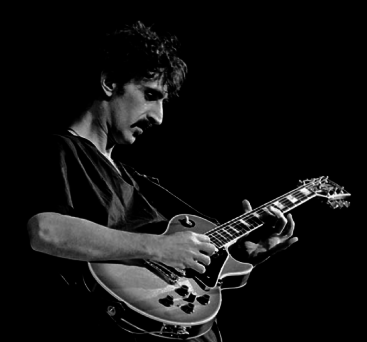 Note: This is the original 2003 version with wording and typos intact for nostalgic reasons. Readers beware :-))

In 1995, Frank Zappa was posthumously inducted in the Rock and Roll Hall of Fame by Lou Reed "One of the things I most regret is not knowing Frank better," Reed admitted -- which no doubt caused some to wonder why Lou was on stage. Frank's daughter, Moon, gave a borderline-tearful acceptance speech, ending with "I am sorry my Dad's not here to receive this. He would have enjoyed it."

For many devoted followers of Frank Zappa's music and iconoclastic personality, the thought of Frank "enjoying" the Rock and Roll Hall of Fame is dubious. Frank Zappa might have placed his induction in Cleveland's Rock Hall in the same category as other tributes by rock journalists, record executives, and radio station programmers that came very late in his career. Zappa fought these guys for years to stay in business, and he knew they never really understood what he was up to musically.

For each type of music," he once said, "there are listeners who think the reviewers don't know what they're talking about. These listeners, when excited about a certain group or style of music, will fight for it in their hometowns. These are the people who have made it possible for me to stay in music through the years - and I thank them for it."

To some, Zappa remains an experimenter, a "fringe artist," or worse (as recently dismissed by a work friend as "60's drug music.") Zappa's mentor, the classical composer, Edgar Varese summed it up when he disapproved of all the "isms," and called himself "One-all alone." Zappa certainly was that -- an individual.

Frank admired and promoted Varese throughout his career. Varese's quote -- "The modern-day composer refuses to die" -- was a motif on Zappa's record covers. Frank used that idea repeatedly in his interviews and publicity. (For a complete understanding of Edgar Varese -- and, specifically, why Zappa thought of him as his musical hero -- listen to The Complete Works by the Royal Concertgebouw Orchestra, Asko Ensemble, conducted by Riccardo Chailly, on London records.

I was 13 when Zappa's first record --The Mother's of Invention's Freak Out appeared in 1966. I bought it on the merits of its bizarre cover art alone. I knew nothing about this "group" and had never heard any of their music. I loved it at first listen. I immediately thought I understood Zappa. He was telling me that it was somehow OK to be me. Beneath the outlandish schtick, disparate chordal structure, and poly-rhythms, there was a humanist here -- cutting through the pop culture with cutting-edge songs like "Who Are The Brain Police?" and "Trouble Coming Every Day." I was hooked on Zappa from the beginning.

Initially, I felt alone in my appreciation for these outrageous characters. Most of my friends were into the ultra-hip music of the '60s, not the retro "do-wop" of "Go Cry On Somebody Else's Shoulders" or the strange, seemingly unorganized sounds of "Return of Monster Magnet." Fortunately, my mother felt like she knew a little about Frank because she admitted he reminded her of Spike Jones.

So, I was not alone and had since personally met a wide array of folks -- from a Swedish scientist visiting Georgetown University (who was an even bigger fan than me) to a fireworks vendor in North Carolina's Outer Banks (who had a more prominent "live tape" collection). They both agreed that Frank Zappa was one of the 20th Century's greatest musicians. Of course, the sold-out crowds at Zappa's concerts spoke for his popularity -- but "greatest musician?"

Here are a few quotes from others who share my opinion of Frank Zappa -- a truly "one of a kind" artist, and, yes folks, a musical genius.

"I was surprised that someone could be so multi-talented, be a great writer, and so articulate a composer. Moreover, he was a virtuoso technician on guitar and had an incredible sense of humor. He had all those skills and the ability to conceive, write, and orchestrate very complex orchestral scores.

"It was important that Frank be shown to the world not as a rock star, but as a serious composer."

"My first reaction was that I couldn't believe it. When I learned that Frank Zappa was a composer of serious classical music, I told my partners, "OK, there's some of these pop stars who try to do this kind of stuff, but I am sure that he is just a beginner." I was really surprised when I saw the high quality of compositions like "Mo 'N Herb's Vacation."

"Frank was always respectful and very straightforward. If some problem came up, he'd ask what I thought could be done about it, because he didn't want to put any ideas in my head. He wanted to know what my thoughts were."

"Americans are really suspicious of anything cerebral, and Zappa didn't disguise his intelligence well enough. In addition to being a man of wide-ranging talent, one amazing thing that always struck me about Frank was his melodic dimension.....Frank Zappa was my Elvis."

--- Matt Groening, creator of The Simpsons

"Never stop until your good becomes better, and your better becomes the best." --- Frank Zappa

I have continued to enthusiastically follow Zappa's career through 60-plus commercial releases over a 60 year span. I had the advantage and pleasure of seeing Zappa perform at:

Highlights: At the 1969 Atlantic City Pop Festival ("King Kong") and in concerts at Baltimore's Lyric Theatre ("Mud Shark" and "Billy the Mountain" in one afternoon), Washington, DC's Constitution Hall midnight show with the Grand Wazoo orchestral line-up), at Carr's beach near Annapolis (where Frank sang a long, probably ad-libbed song about Godzilla roaming his birthplace, Baltimore), and at my alma matter, Maryland University in 1974-- where I finally got a chance to talk to the man backstage and tell him how much I admired him.

The last time I saw Frank in person was in 1988 at the small Warner Theatre, a few blocks from the White House. Frank played three nights with what would be his last group -- and last tour. He called it the "best band you NEVER heard" because the group disbanded early into the tour, falling short of it's cross-country US goal.

Thankfully, that last show was the best I ever saw Frank perform. He was relaxed and in a great, talkative mood -- and very funny. His wife, Gail, was "in the house" that night, although I couldn't spot her. Frank performed a fantastic "Zoot Allures" which is my favorite guitar instrumental in his catalog. He played the "Congressional" medley on his synclavier, and the band did two covers, "I Am The Walrus," and "Stairway to Heaven." Zappa and Ike Willis shared vocals with guitarist, Mike Keneally. Just outstanding all the way down the line. (Just recently saw Frank's Barcelona, Spain video which includes "Walrus." What's missing is the audience participation I recall at the Warner theatre. There, everyone was singing the chorus and the "coo coo cachoobs")

Over the years I have become completely convinced that Frank Zappa's musical genius was beyond genuine. Again, I am certainly not alone. I began playing guitar (also in 1966) and the deeper I get into the instrument, the more astonished I am at Zappa's unique, yet amazingly concentrated guitar riffing. Zappa is the only musical composer you can name that covered his bawdy, pseudo-porn "comedy" music ("Half a Dozen Provocative Squats" comes to mind) with the same dedication that he showered on his classical compositions (e.g., anything on "The Yellow Shark.")

From time to time I will be adding comments and information about FZ here, so please bookmark this page if you're interested. Your comments are enormously appreciated. I am especially interested in posting information from FZ fans who can articulate what the man and his music mean to them today. My understanding is that Frank has more websites devoted to him than any other American Composer. Now, that's "bitchen."