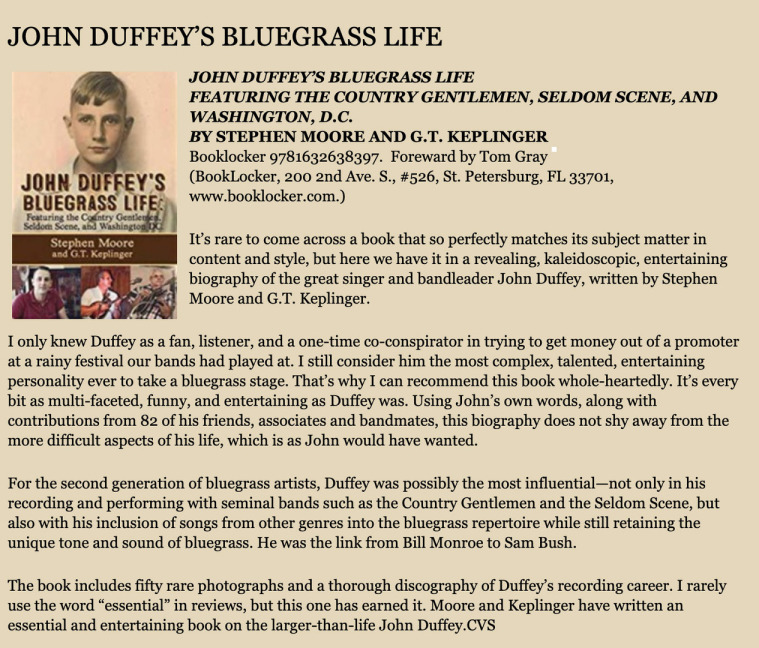 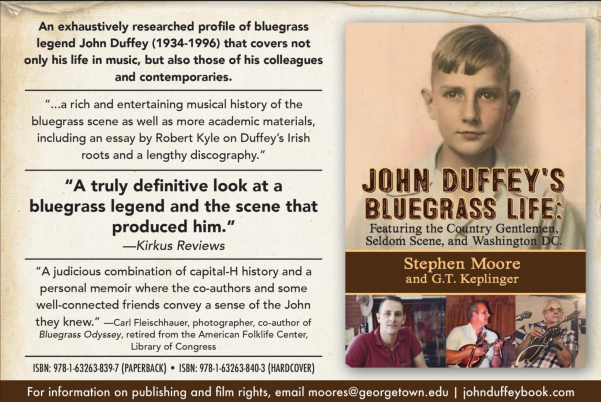 “An exhaustively researched profile of bluegrass legend John Duffey (1934-1996) that covers not only his life in music but also those of his colleagues and contemporaries…Despite the copious detail, however, the book offers a rich and entertaining musical history of the bluegrass scene as well as more academic materials, including an essay by Robert Kyle on Duffey’s Irish roots and a lengthy discography… A truly definitive look at a bluegrass legend and the scene that produced him.” — Kirkus Reviews 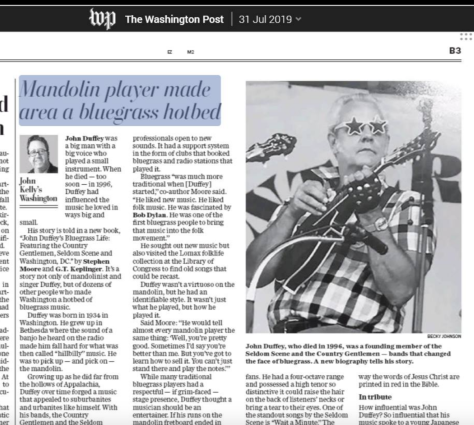 John Duffey was a big man with a big voice who played a small instrument. When he died — too soon — in 1996, Duffey had influenced the music he loved in ways big and small.

His story is told in a new book, “John Duffey’s Bluegrass Life: Featuring the Country Gentlemen, Seldom Scene and Washington, DC .” by Stephen Moore and G.T. Keplinger. It’s a story not only of mandolinist and singer Duffey, but of dozens of other people who made Washington a hotbed of bluegrass music...Central to “John Duffey’s Bluegrass Life” is material from a wide-ranging, four-hour interview Moore conducted with Duffey in 1984 at the musician’s Arlington home. In the book, Duffey’s quotes are italicized. It reminded me of the way the words of Jesus Christ are printed in red in the Bible.

"A great overview of the acoustic side of the DC music scene, with a unique focus on the inception of the progressive bluegrass movement and the cast of colorful characters who pushed the music forward, while respecting and preserving the roots. It's all there in these pages." Pete Kennedy (multiple WAMMY award winner and member of Kennedy Center Artists-in-Residence, The Kennedys)  Author of Tone, Twang, and Taste: A Guitar Memoir.

"Chances are, few people outside of the bluegrass world have ever heard of John Duffey. Fewer still probably imagined we needed an exhaustively researched biography of a bluegrass musician from, of all unlikely places, Washington, D.C. Veteran entertainment journalist Stephen Moore and G.T. Keplinger prove them all wrong with this tail-to-tip examination of the life of Duffey, dead nearly a quarter of a century but fondly recalled by seemingly all who crossed his quietly eccentric path. Fans of the Seldom Scene and the Country Gentlemen, Duffey’s best-known genre-breaking ensembles, will find "John Duffey’s Bluegrass Life” full of factoids and anecdotes that fill in blanks about the origins of the songs and bands. Those who never heard Duffey, or heard of him, will enjoy a story of a life worth celebrating, as well as learning a thing or two about bluegrass music in general. Either way, Moore and Keplinger have done us all a favor."   Buzz McClain, former entertainment writer for Playboy, The Washington Post, etc and communication expert in higher education.

"Overdue (but well worth the wait)"    "This is an important book.  John Duffey's contributions to bluegrass were immense, and this book is about Duffey and those who, by fate or providence, were in the right place at the right time to help him along his life's bluegrass journey.  There are many stories and anecdotes that helped me understand and appreciate the man whose tenor singing can still bring goosebumps to my arms 30 years after first hearing it.  Thank you to Mr. Moore and Mr. Keplinger for this obvious labor of love.  I've been reading it while fittingly listening to Akira Otsuka's "Epilogue.'"  John Haydt, Lansdale, PA.  (Amazon)

"Seems to be a realistic portrayal of Duffey and his place in the Washington D.C. bluegrass scene"

This story flowed smoothly, which is not a given since it is packed with details and individuals who defined the bluegrass scene in Washington D.C. The authors manage to weave the players as they form bands and create a distinctive sound, without confusing the reader. The theme that ties it all together is the talent and personality of John Duffey, who did much to tie that period of musical history together. It is not a gushing tribute to Duffey, but it is consistent in the respect the musicians have for him, and the transition of traditional music to an urban audience. I enjoyed it very much."  A. Horn (Amazon)

"As most of my friends know I’m a dedicated fan of John Duffey and his utterly amazing talents. There will never again be a voice even close to the hauntingly beautiful techniques and pure talent he had. If like me you never had the honor of meeting him yet recognize his ultimate talent and want to know more, you really need to read Stephen Moore and GT Keplinger’s book, “John Duffey’s Bluegrass Life”. It fills a void!"   Jewell Burke (JDBL Facebook Group)