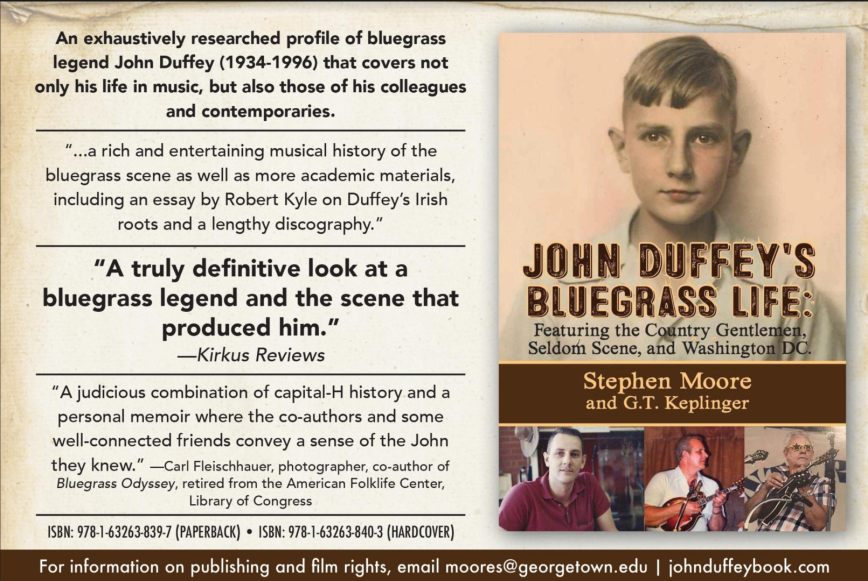 John Duffey’s Bluegrass Life: Featuring The Country Gentlemen, Seldom Scene and Washington, DC. with a Foreword by Tom Gray is the definitive biography of one of bluegrass music’s most important artists of the genre. Through his work as a founding member of these two pioneering bands, John Duffey urbanized bluegrass and introduced it to a broad new audience. John’s quotes from a four-hour, never-before-published 1984 interview are italicized throughout and provide the book’s foundation.

The book begins with a profile of his father, John Humbird Duffey, Sr., Metropolitan Opera star and chronicles Duffey’s earliest exposure to music, listening to opera on the radio with his dad. Childhood friend Bill Blackburn serves up memories of Duffey from the 2nd grade through high school and beyond involving bowling, baseball, and after-school drag racing adventures. The book reveals that it was hillbilly music on the radio that inspired Duffey to learn guitar and mandolin after a brief failed attempt at the banjo.

Accounts of Duffey’s early musical career provide an overview of John’s first bands, leading up to how The Country Gentlemen were formed following a horrific car accident. The Country Gentlemen’s Bill Emerson, Charlie Waller, Eddie Adcock, and Tom Gray are profiled and interviewed.

For the first time, John’s biological daughter, Ginger “Sam” Allred, speaks candidly about her relationship with both Duffey, and her father, Pete Kuykendall. Duffey’s friend Pete helped shape the Gent’s first recordings, played with them, and founded Bluegrass Unlimited magazine.

More than 50 rare or never-before-seen photographs—some by Carl Fleischhauer—create a fascinating portrait of the complex, iconoclastic entertainer. Carl also contributed to his memories of John.

Bill Monroe and Ralph Stanley are featured and the authors make a rebuttal to negative assertions that Ralph Stanley made about Duffey in his 2009 autobiography. “John Duffey could be as mean as a striped snake. He did all kinds of things that I thought were just plain wrong,” Stanley claimed. This book sets the record straight.

Also included is the complete article Duffey wrote for Bluegrass Unlimited, “So, You Don’t Like The Way We Do It (or Damn Your Tape Recorder). Duffey also discusses why he quit The Country Gentlemen, setting up the complete story of The Seldom Scene, as told by Duffey, John Starling, Ben Eldridge, Dave Auldridge, Mike Auldridge, Phil Rosenthal, and Tom Gray.

Scores of colorful stories for which Duffey was known are carefully collected here and facts are separated from urban legends. Examples include encounters with fellow musicians, presidents, and The Tonight Show orchestra, as well as tales about the Grand Ole Opry, the saga about John’s stolen mandolin, his outrageous emcee antics, and more.

Duffey’s 1995 UK interview by Tom Travis is included as is an Art Menius 1987 feature article on the “New” Seldom Scene for Bluegrass Unlimited. In the final chapter, “Fare Thee Well,” friends and bandmates remember John’s last days before his fatal heart attack. Washington Post music critic Richard Harrington granted permission to reprint the 1996 obituary he wrote for John, A Mandolin For All Seasons.

The book’s narrative is supplemented with a 43-page Discography that provides track listings, recording dates, producers, composers, and musicians for every album.